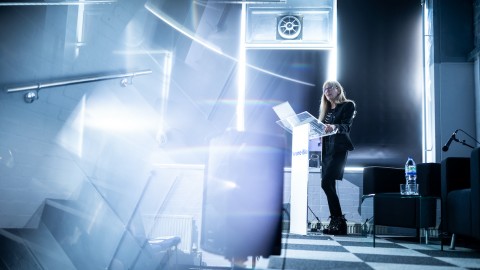 Intranasal treatment for 6 weeks resulted in a marked decrease of brain amyloid and, after 14 weeks, improved cognitive performance comparable to that of normal mice. The results underscore the effectiveness of Neuro-Bio’s drug candidate and represent a remarkable step forward towards the treatment of Alzheimer’s disease in humans.

Baroness Professor Susan Greenfield, Founder and CEO of Neuro-Bio, says: “By using basic neuroscientific knowledge we have identified what we believe is an underlying mechanism driving Alzheimer’s disease in the brain, and have developed a molecule (NBP14) to combat it. Our recent efficacy study in mouse models further validates previous work describing an erstwhile unidentified process in neurodegeneration and offers very exciting prospects for treating the disease in humans. This research should help position the drug intercepting this process, NBP14, for human clinical trials and hopefully create an entirely new era of Alzheimer’s therapeutics.”

Professor Paul L Herrling, former Global Head of Research of Novartis Pharma and Non-Executive Director at Neuro-Bio, says: “The results consistently indicate that NBP14 might interfere with the neurotoxic process that leads to neuronal degeneration in Alzheimer’s. This work has very exciting implications for treating Alzheimer’s, because it is based on a strong scientific theory that hasn’t yet been applied to treatment of the disease.”

The UK regulator, the Medicines & Healthcare Products Regulatory Agency, has accredited NBP14 with one of their first ‘Innovation Passports’ as part of a new licensing pathway that aims to reduce the time to market for innovative medicines.

NBP14 works by intercepting the process that Neuro-Bio believe could be a primary driver of neurodegeneration, the action of a brain chemical named T14 [1, 2]. In the last twenty years since it was first identified [3], evidence has become increasingly compelling that T14 plays an important role in early cell growth and normal development. However, this action can become toxic if triggered inappropriately in maturity [4] and ultimately could lead to Alzheimer’s disease where brain levels of T14 are shown in the current paper to reflect degree of degeneration.

Inactivation of T14 could potentially serve as a treatment for Alzheimer’s by halting the early advance of cell damage occurring first in primarily vulnerable cells deep the brain. Initially identified by the neurologist Martin Rossor back in 1981 [5], these primarily vulnerable cells form a kind of central hub in the brain, extending up from the top of the spinal cord. A key feature is that they are the first to display a pathology early in neurodegeneration [6].

Neuro-Bio believes that detection and measurement of T14 could be developed as a blood test or skin biopsy to identify the occurrence of the degenerative process during the window of ten to twenty years that typically occurs before symptoms start. If NBP14 proves effective in human trials, it could become a routine, home-administered nasal spray to halt neurodegeneration before any symptoms appear.

No harmful side effects at the active dose in the disease model were observed with NBP14 during the efficacy study. Neuro-Bio plan to take the drug to clinical Phase I trials as soon as possible.

Dr Gregory Cole, Professor of Medicine and Neurology at UCLA and Associate Director of the UCLA Alzheimer's Center, says: “I've specialized in Alzheimer’s disease research and worked for real treatments in UCLA’s Alzheimer's program since 1994. Along with my colleagues around the world, we’ve all witnessed hundreds of failed drug trials based on existing theories and we are ready for truly new approaches. NBP14 has distinct advantages over other drug candidates and I am happy to work with this team at Neuro-Bio and share in their success.”

Neuro-Bio is a privately-owned biotech out of Oxford University with a focus on developing a first-in-class  effective treatment for neurodegenerative disease. The company has discovered a novel 14 amino acid bioactive peptide (T14) derived from the C terminus of acetylcholinesterase (AChE). T14 is neurotoxic in the mature brain and published data shows it to be a potential key driver of neurodegeneration.

Based on almost 40 years of research by Professor Baroness Greenfield at Oxford University, Neuro-Bio Ltd was incorporated in 2013, when seed funding enabled the first patent filing on chemical composition of matter for neuroprotection.

NBP14  is a ‘cyclated’ peptide, ie a structurally modified form of  T14 itself, bent into a circle such that it is inactive at the target (an allosteric site on the alpha-7 receptor). By occupying this target, it will displace its naturally occurring, potentially toxic counterpart from the crucial site of action, thereby protecting against further degeneration. Hence, as reported in the paper, subsequent downstream effects will be blocked such as the production of amyloid in the hippocampus.