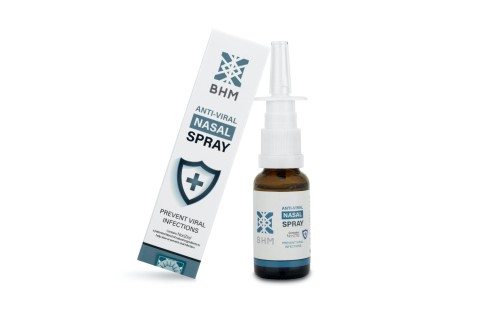 Designed to protect, capture and prevent the inhalation of infectious viruses, including SARS-CoV-2

Birmingham, UK, 28th April 2022 / Sciad Newswire / Birmingham Biotech Ltd, an innovator in diagnostic tests, protective nasal sprays and mobile medical facilities, today announces the Singapore launch of its latest technology, BHM® Anti-Viral Nasal Spray, an easy-to-use nasal device with a unique patented formulation, Norizite™, designed to help prevent infection from the inhalation of airborne viruses within the nasal passages. The product will be available in Singapore from 1st May.

The nose is a major point for infection from airborne viruses such as SARS-CoV-2. Research has identified that mucus-producing goblet cells and ciliated cells in the nose are critical for COVID-19 initial infection and transmission1.

Norizite™ is a gel-like formulation that creates a strong barrier in the nasal cavity that physically traps viruses and helps to remove them from the nose.

The unique formulation was developed by the Healthcare Technologies Institute at the University of Birmingham. The two main ingredients are carrageenan, a natural polymer derived from red seaweed, and gellan gum. Both are polysaccharides that coat and retain virus particles so they do not infect the local cells. The formulation has been selected for its muco-adhesive properties – the ability to stick to the layer of mucous on the cells in the nasal passages. It has been carefully designed to ‘plume’ rather than ‘jet’ when applied with a typical nasal spray applicator, offering up to six times more surface coverage than other nasal sprays2.

The University of Birmingham lab tests have shown that Norizite™ can prevent infection of cells in culture with SARS-CoV-2. The research confirmed the complete inhibition of SARS-CoV-2 infection up to 48h post inoculation when exposed to the carrageenan/gellan blend2.

Follow up lab studies at the University of Birmingham have indicated that Norizite™ is also effective against several infectious variants of SARS-CoV-2 in cell culture, and is testing more SARS-CoV-2 variants at present.

Dr Richard Moakes from the University of Birmingham commented, “One of the biggest differences between the BHM® Anti-Viral Nasal Spray and many other nasal-based products on the market is its ability to spray whilst still maintaining a high viscosity. When many sprays are too thick, they result in a “jet” which ends up having a very small coverage. Other sprays are too thin, meaning they drip out of the nose and do not trap virus particles sufficiently. The BHM formula has been engineered to have an optimal viscosity whilst providing a high surface coverage and lasting retention in the nose. This allows the spray to trap virus particles effectively with minimal discomfort.”

Michael Hsu, Managing Director at Birmingham Biotech commented, “The BHM® Anti-Viral Nasal Spray is not a treatment but rather a coating for the nasal cavity, which is known to be a major point of infection for many airborne viruses, such as respiratory syncytial virus and flu. The nasal spray formulation is designed to provide an additional layer of protection on top of existing measures such as vaccination and masks, and we hope it will support people’s daily activity as we learn to live a new normal.”

The BHM® Anti-Viral Nasal Spray will be available in Singapore from 1st May. The launch date for the UK and Europe will be announced soon, and the product is anticipated to launch in Hong Kong and Latin America later in the year. Birmingham Biotech has recently signed an agreement granting exclusive distribution rights to TannerLAC UK Limited in the Latin American market, including Mexico and most countries throughout Central America and South America.

The product will be available to purchase in Singapore from the health and beauty retailer Guardian via this link.

Birmingham Biotech is an innovator in diagnostic tests and protective nasal and throat sprays for medical conditions with an urgent, unmet need. In partnership with the University of Birmingham, Birmingham Biotech is committed to ensuring that patients in developing countries have access to the latest high-quality, affordable healthcare delivered through its rapid global supply chain. Birmingham Biotech is trusted by governments and healthcare providers around the world as a one-stop-shop for tests, equipment and consumables approved and recognised by international regulators.

About the University of Birmingham

The University of Birmingham is ranked amongst the world’s top 100 institutions. Its work brings people from across the world to Birmingham, including researchers, teachers and more than 6,500 international students from over 150 countries.

The Healthcare Technologies Institute, led by Professor Liam Grover, brings together leading experts from a variety of disciplines across the University of Birmingham, including chemical engineering, biomedical science, computer science, applied mathematics, chemistry and physics. Researchers across campus are working collaboratively to speed up the translation of new discoveries into health applications. The research will support the development of existing markets and stimulate new ones for Life Sciences businesses, enabling them to bring products to market quickly, at less cost with reduced risk.